As an executive coach my focus is to help you learn to think clearly and communicate confidently, regardless of what is coming your way. 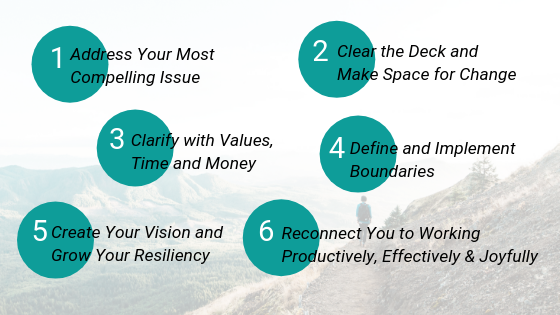 What My Clients Say:

I was standing on the edge of burnout from an incredibly heavy work load for a long period of time. Resigning was not an option but I wasn’t keeping everything afloat. Life had become a cycle of work and sleep. Gigi was able to see through to the exact points of pressure and alleviate the frustrations of my working environment. Work became enjoyable again and life became much more harmonious.

I was in a position where I was clearly more experienced than my boss and he knew it. Despite exceeding my sales quotas, I spent days under fire and was terminated unexpectedly. I signed on to work with Gigi. She helped me gain my footing through a tough transitionary period. Working with her I reclaimed my confidence and actually began enjoying interviews. I'm happy to say that I have an exponentially better role and am much more fulfilled. I couldn’t have done this without her.

I felt like I was in the driver's seat without a steering wheel. From inheriting a dysfunctional team & shifting sales metrics at work, to an ADD husband & 2 kids in high school, there were so many challenging dynamics that I often felt paralyzed. Gigi has been my strategic partner in every sense of the word. She helped me reshape my team, and craft and deliver vital conversations that I needed to have with my CEO, CFO, sales team and fellow peers.

After a 25-year professional career and over half of those in Sr. Level and Executive positions, I found myself in the role of being the first female Chairperson in a male-dominated organization. This presented challenges at every turn. I relied on Gigi to be my silent sounding board and strategist and her support was invaluable. I felt more confident and grounded going into board meetings.

I found myself at the painful point of thinking that I had lost my professional edge. I wasn’t ready to retire but wanted to be ready to start my own business when I did. I knew I needed to be a better version of me in order to do that. I attended one of Gigi’s free webinars and after that I knew she was the coach I wanted to work with. We’ve been working together for 3 years now and I can say that I’m definitely a better version of my old self. I’ve been recruited for new and high-visibility role and I am able to balance my work and private life with a new found sense of ease. Highly recommend!

Gigi is incredibly supportive and brings great clarity to the complexity and business of being an entrepreneur. Her thought provoking discussions generate insights and action steps to success. Her coaching helps me take a deeper look at the layers beneath the surface of what I think is going on. I loved that our coaching started with a clean sweep, and moved into prioritizing and being scheduled. Each week built upon the previous. She is a fantastic leader and coach and I highly recommend her.

The tools and exercises Gigi utilizes have been invaluable helping me identify specific changes I needed to make to realize my vision. Gigi kept me focused on sustaining these changes and six months later, I am thrilled with our progress. What’s surprising is how painless and effortless it has seemed to move to this new place of “relaxed productivity”. If something is stopping you from reaching your biggest vision, call Gigi. You won’t be disappointed.

Preparing for a final round of interviews for an executive position can be daunting.  There are several parts to the process and each piece is critical. Gigi’s thorough and structured approach was just what I needed – from developing responses to potential questions, to preparing a written document and helping me formulate my questions for the company.  I went into the interview calm, confident and fully prepared. -

Ready to get started.

Image at the top copyright © FocusOnNaturePhotography.com by Sarah Dolliver